June is just around the corner! You know what that means, hopefully: Pride Month! 🌈 Of course, this also means lots of rainbows everywhere. And I really mean everywhere. For a while now, an increasing number of brands have turned their brand logos into rainbow versions to celebrate Pride Month. Here are some examples: 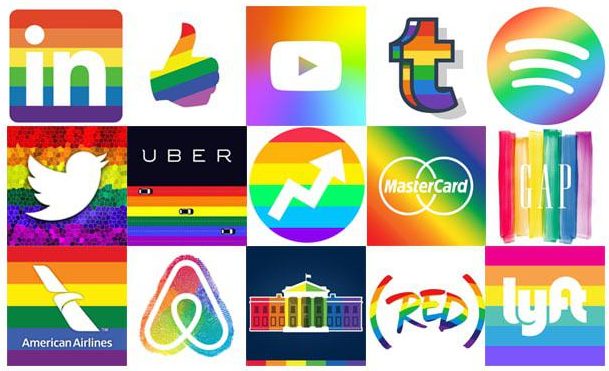 Showing pride, though, is not quite as easy as simply slapping a rainbow onto your corporate logo. If you’re not an inclusive company, your potential LGBT customers will see right through your new profile picture and your flimsy attempt at targeting them. Let’s look at some examples of corporations who have all rainbow-ed up their logos when they clearly had some LGBT skeletons in their closets: 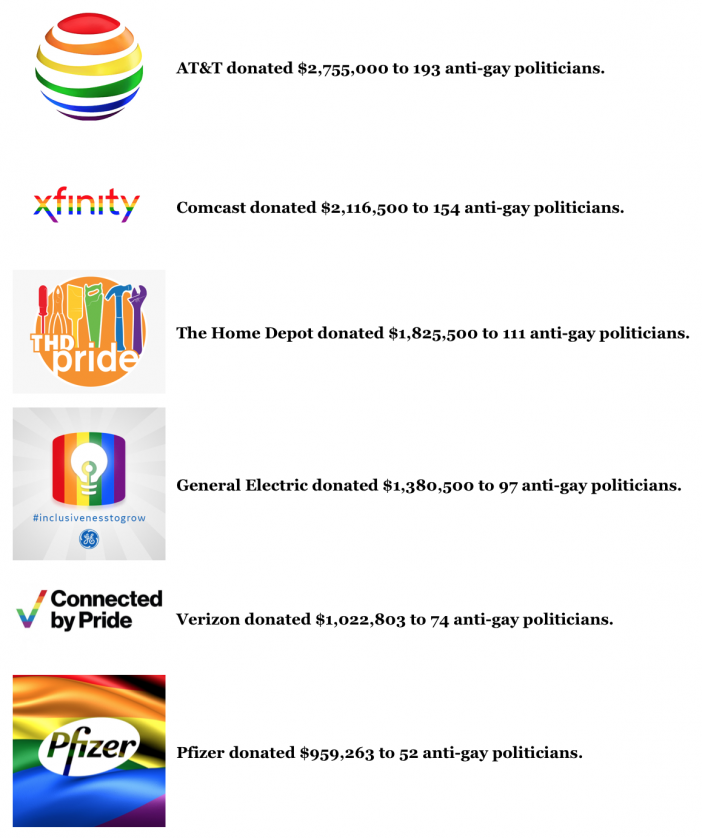 Beyond these obviously bad attempts at presenting fake LGBT inclusiveness through rainbow profile photos, there is also an increasingly wide range of rainbow products gracing our stores every June. Just have a look at Target’s Pride online shop (which is online all year round – one of the reasons Target is my favorite): 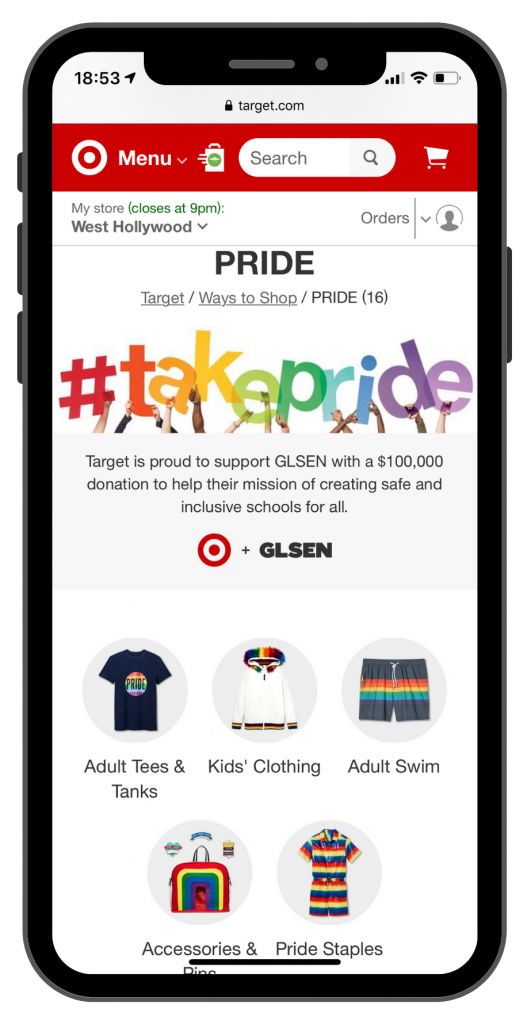 In the wider LGBT community, there is some controversy on such rainbow products. Let me explain. Every brand wants to get in on Pride these days. However, not that long ago, companies pulled their ads from the Ellen episode in which Ellen DeGeneres came out as gay. They wanted nothing to do with anything remotely close to the LGBT-sphere. Today, Amazon’s Alexa will tell you Pride facts, Nike has their “Be True” collection, Listerine has a Pride mouthwash (I know, right?), Burger King had a “Proud Whopper” at some point, Bubly has Pride sparkling water, Dr. Martens has their Pride boots, Abercrombie & Fitch has their own Pride collection along with a Pride cologne, … the list goes on, and on, and on.

Are all these Pride-related promotions genuine attempts at supporting the LGBT community or just rainbow-washing?

This is actually a very difficult question to answer. I’m honestly a bit torn on the topic myself. In general, I get very excited when brands create rainbow products because it seems better to live in these times than in the days when brands didn’t want to be associated with anything LGBT-related. However, it’s also somewhat irritating that massive corporations make money off a symbol that represents the LGBT community’s long history of struggle and oppression – especially when the benefits go to groups and individuals who are not LGBT.

It is understandable, that corporations who are decidedly pro-LGBT want to show off their allyship. However, being an ally shouldn’t be about your corporation, it should be about who you’re an ally to, shouldn’t it? This discussion is very similar to the debate about whether LGBT pride is a protest or a celebration. It started out as the former and it ended up becoming the latter. But it’s still a little bit of both. Think about this: As an individual identifying as LGBT, how would you feel about people who tag along to parades when that is their only action of solidarity for the whole year? Should they be allowed to wear the rainbow? With all the colorful celebrations it’s easy to forget that there are still horrible fates for LGBT people across the world and LGBT youth suicide data is extremely concerning.

Companies who truly support LGBT rights – and not just the cash that follows the rainbows – should stop donating to conservative parties who are relentless in their attacks on LGBT equality. Instead, they should follow the examples of Salesforce, who announced boycotts of Indiana, when then-governor Mike Pence signed anti-LGBT legislation into law. Or IBM, PayPal, and Google when they did the same in 2016 after the state of North Carolina passed anti-trans legislation.

The LGBT community is under constant threat. The Trump administration has set a strict anti-LGBT agenda: It banned trans and HIV+ people from the military, nominated a host of federal judges who are opposed to LGBT rights, attempts to eliminate protections for transgender people in homeless shelters, and is outspoken about its pro conversion therapy stance. And yet, his campaign deems selling a $35 rainbow MAGA hat, whose proceeds go against the community, appropriate. Probably the worst example of rainbow-washing in history. 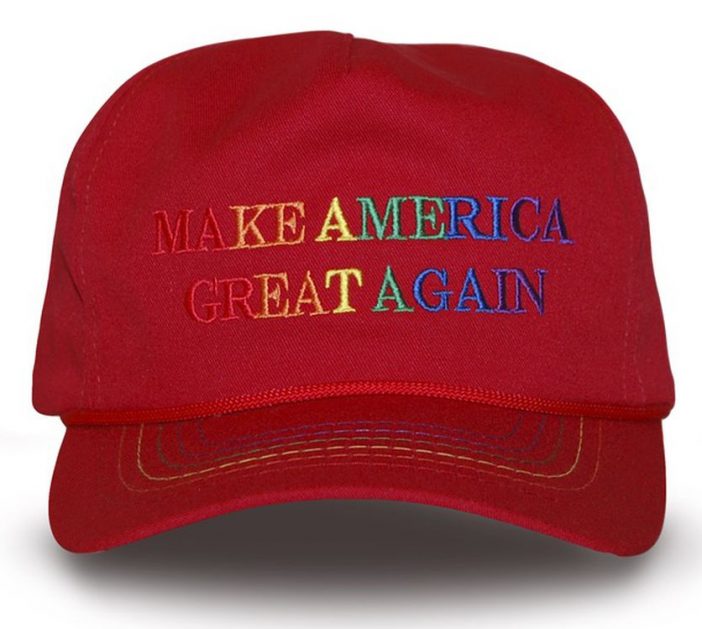 I think that companies should be held to a higher standard of allyship and push towards a world where the entire LGBT community is genuinely supported and recognized. Brands should support the LGBT community authentically, and, above all, all year-round. Corporations should understand that Pride Month originated on resistance and it isn’t a once-a-year party that they can cash in. Until that time comes, though, if even one LGBT kid sees a rainbow ad or that temporary rainbow profile photo and decides to live another day, it was all worth it.

Now, I’m curious to hear from you! Have you bought any rainbow products? If yes what was it? And which products would you love to see rainbow-y-fied?

Stay tuned for the next post where I will explain the HRC Equality Index for companies and why you should care about it.

Do you want to know more about LGBT-Marketing? Read my other posts, too!

Hi, I'm Olivier - student and marketing professional in the auto industry. I'm passionate about future mobility, marketing, and pop culture. I also happen to be a proud gay man. The Queer Marketing Blog is about all that and more. It shines a light on how a gay Millennial sees the marketing world around him. It should be an informative, helpful and fun way to show marketers why they should care about LGBT-marketing. Since the Stonewall riots in New York in 1969, many governments across the globe have realized, that people who identify as lesbian, gay, bisexual or transgender (LGBT) should be offered the same rights and privileges as their fellow straight and cis-gendered citizens. You may ask now, if LGBT people seek full equality, though, why should you market to them differently from everyone else? Apart from the fact that in many countries, including Switzerland, equality is still far away from reality, from a marketing standpoint, the answer lies in the ability of brands to create an emotional bond with every single one of their consumers. This of course leads to higher conversion rates, and more sales. With socio- and geo-demographic mapping of the LGBT community and analyses on their propensity to spend across varied markets, we have been able to learn that the LGBT community collectively over-indexes in many categories. The 2015 Nielsen LGBT consumer report shows that when compared to the general population, LGBT people spend 35% more online, are 25% more likely to see a movie on opening weekend and are 26% more likely to subscribe to an entertainment streaming service. A 2017 GLAAD study showed that 20% of Millennials – consumers who are building considerable earning potential in their 20s, 30s and 40s – identify as LGBT. In addition, LGBT consumers are over twice as likely to buy from companies they trust. Marketers need to find ways to authentically engage with this growing segment. To find out how to make LGBT-marketing work for your brand, read on!