This very focussed one-day event by the organizers of MuseumNext was called MuseumTech but it was actually much more than the geeky tech event one might have expected. In a time when the digital becomes ever more ubiquitous, for museums, questions about technology become intertwined with strategic aims, topics such as outreach and accessibility as well as with the ultimate question of their reason for being.
The Museum Robot
Marleen Hartjes, Van Abbemuseum, Eindhoven
The Van Abbemuseum is a museum of Modern and Contemporary Art, which calls itself a „radical & hospitable Museum“. According to Hartjes everyone is talking about accessibility but  the average museum visitor still „has a high level of education, is white, able bodied and female“. Another target group as with many museums are schools. However, there are 3.6 million Dutch citizens with some kind of disability, more than kids that are currently in primary and secondary education, besides the fact that much of the existing audience will become disabled as they grow older. Thus for the Van Abbemuseum the idea that museums should be accessible for everybody, regardless of any handicaps is not just an empty slogan but a strategy for increasing their audiences. Consequently they have adapted an existing robot to enable people to visit the museum over distance. The robot can be remote controlled by individual users from their personal computer. Equipped with a camera and sensors it can be navigated through a museum while it transfers live video to the user at home. At the same time, the human size robot (158 cm height) displays the video of the remote user who thereby can also involve into social interaction with other audience members. But the robot has meanwhile turned into a tool for other purposes as well: it is used by people who live far away and otherwise cannot visit the Van Abbe Museum or serves as a remote classroom for students who can’t afford the transport fees and it can also be used by exhibiting artists to revisit the exhibition or letting experts tour the building from abroad. 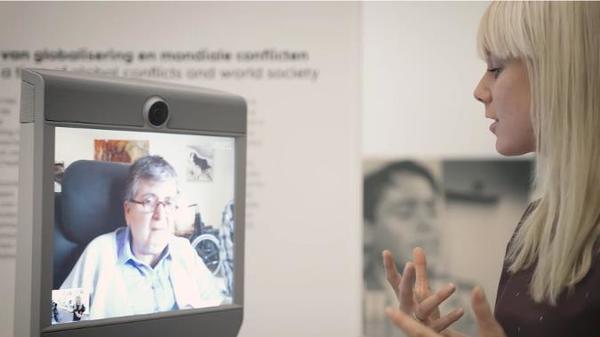 The Van Abbemuseum in Eindhoven can be remotely visited with a robot. (Image: vanabbemuseum.nl)

Impact Framework
Merete Sanderhoff, Statens Museum for Kunst, Kopenhagen and chair of Europeana Network
Unfortunately museums nowadays are still very often assessed by number of visitors rather than by their ability to fullfill their mission. Here the impact framework, presented by Merete Sanderhoff on behalf of the Europeana Network could come in handy. It breaks down impact into three main categories that stand for very specific forms of return on investment: First, there is social and cultural impact by triggering change of attitude or behaviour, secondly, there is economic impact by contributing to growth in society. Third, there is innovation impact, defining contributions to development of new products or services. The Impact Framework shows institutions how to assess existing projects according to their impact but also how to design new projects centered on it. The according Impact Playbook is free for download. An interesting reference in this context is Luigi Sacco, whose text on Culture 3.0 inspired the framework.
The Rijksstudio
Peter Gorgels, Rijks Museum, Amsterdam
The Rijksstudio, a platform for collecting, sharing, reusing and remixing the content of the Rijksmuseum is not really new but it is quite impressive to see how consequently the Rijksmuseum promotes the idea, that the content of the Rijksmuseum belongs to all citizens and their willingness to give up total control over the material once it is downloaded. Most appealing to me seemed the results of the Rijksstudio Award, where artists and designers came up with new ideas and products inspired by the artworks published through the Rijksstudio, as well as the Schipol airport project where a baggage carousel was turned into a gallery.

Virtual Reality Check – Integrating VR Into A Traditional Art Exhibition
Hillary Night, Tate, London
From the 22nd November the Tate will offer a unique VR experience accompanying a Modigliani exhibition. Unfortunately no images could be shown before the opening. However, Night came up with some interesting insights for preparing a VR experience in a museum context, particularly for mainstream audiences. Not only does the actual virtual environment need to be designed in a meaningful way that adheres to the standards of the institution. At least as important are specific supporting structures: One needs for example to think about coaching and instructing the audience in the use of the technology or to manage experiences and the fact that only a few people will be able to access the exhibit. You also need to think about how you can visually intergrate a room fulll of hardware and wires within an art exhibition.
The Jewish Museum Berlin in the Digital Age
Barbara Thiele, Jewish Museum, Berlin
Barbara Thiele from the Jewish Museum Berlin, where this event was hosted, will close its doors for a major overhaul of their permanent exhibition. In parallel they will be rolling out a new digital strategy that „does not differentiate anymore between anlaogue and digital“. Visitors should be getting information about the institution „anytime, anywhere on the channel and device of their choice“. This is because they „produce content for people who never come to our institution“ and „the digital visitors are as valuable as the analogue visitors“. Thus digital channels are not just a nice-to-have add-on or a marketing instrument but a conscious extension of the museum space. Particularly interesting in this context is, that the Jewish Museum will give up control on some of their content. They are currently developing an open map to which the audience can freely add institutions, places, people and walks that relate to Jewish culture in Germany. With the rise of right-wing movements and anti-semitic sentiments to me this seems a bold decision and I sincerely hope that this experiment will be prove of the wisdom of the crowd rather than of its worst instincts.
Digital Mindset
Kajsa Hartig, Nordic Museum, Stockholm
A digital mindset requires museums to deal with uncertainty, to give up control but also to embrace agile development and experiments. Kasja Hartig from the Nordic Museum in Stockhoom gave some examples of such a mindset in action, one of it the “Cosplay <3 Supernatural Beings Competition“ (<3 stands for the heart symbol = „love“). Cosplay has its origin in the far east, where mainly young adults dress up as their favourite protagonists of popular Manga Comics. The competition inititated by the Nordic Museum asked for cosplayers to come up with costumes based on Swedish folklore characters. Three players were actually chosen to develop their designs together with the museum. They even became ambassdors for the museum,  taking over the museum’s Facebook or Instagram account now and then. As part of this project, a seminar with experts on folklore was hosted and streamed online which goes to show that even though this project ran under the banner of #digitalfirst it was a coordinated transmedial experience seamlessly merging analogue with digital events. Another #digitalfirst project aimed at collecting the pictures that people would post on social media platforms with the hashtag #openstockholm to make a stand against the 2017 terrorist attack in Swedish capital. 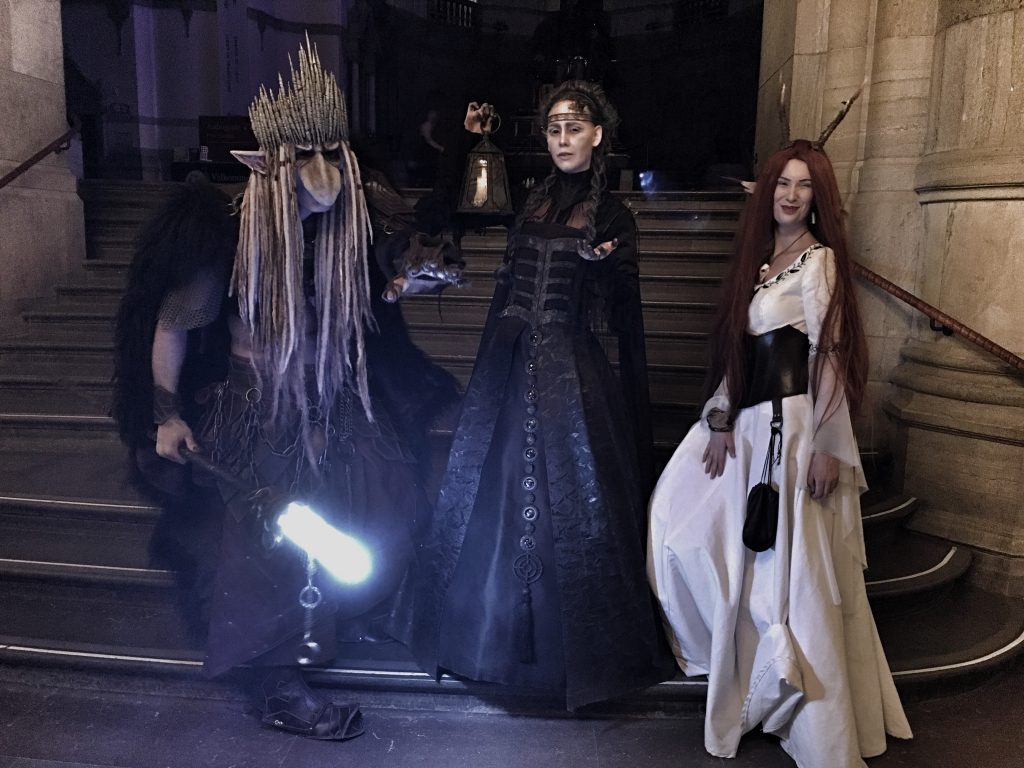 The winners of the Cosplay competition by the Nordic Museum in Stockholm, presenting their outfits based on Swedish folklore characters. (Image: Nordic Museum, Stockholm)

Phil Stuart from the purposeful game studio Preloaded showed some examples of how to create experiences that connect with the audience, based on three main principles, established by the educational scientist Mitchel Resnick and others: 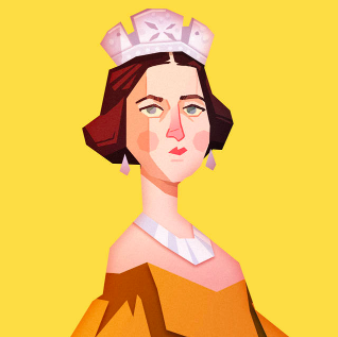 Queen Victoria, one of the characters of the V&A secret seekers, a treasure hunt designed by Preloaded (Image: V&A)

Low Threshold experience: Make participation easy by removing entry barriers, making failure fun and prioritising comfort. At the same time one should aim for High Ceilings: Not everyone is the same, so give people scope for mastery on their own terms. There should be leeway for increasing complexity to emerge but at the same time everyone, independent from their level of skills, should be rewarded. The third concept is Wide Walls: A certain freedom of agency about how to solve a problems, which includes different play styles as well as different modes of play.

Chatbots in a Museum
Stefania Boiano, Guiliano Gaia, Invisible Studio
Last, but not least: artificial intelligence is now entering museums. Stefania Boiano and Guiliano Gaia from Invisible Studio were presenting their chatbot-game for the „Casa in Casa“ in Milan, a storytelling project and treasure hunt for teenagers that combines the four house museums of the city. The chat bot software for Facebook messenger was set up with Sequel in about three months with a low budget. Interestingly for Boiano and Gaia it was a follow-up from a 2002 project with a Leonardo da Vinci chatbot which they admitted ended in failure not at least because a chatbot representing a genius raises the stakes. Reflecting on the learnings of both projects they came up with some interesting findings: First of all: Know your audience! Teenagers love to collaborate, they don’t want to download museum apps (they are very aware of how much money they spent on the phone), they love competition and chatting, they are fast & impatient and they want to be a protagonist. Some though want to know more about the museum and their objects, others just want to have fun. Accordingly the chatbot is designed not to be an antagonist with whom the players would compete but as a peer whom they support in solving the plot and it was also designed in a collaborative process together with teenagers. Here some more advice by the designers: study real human chats, use colloquial language and build a realistic conversation regarding typing speed and dialogue pace. it is also important not to fall into the trap of adapting young people’s acronyms, because those change all the time and also to care about the physical tiredness of the audience. 45-60 min seems to appear an ideal length. Another important note for Museums: Boiano and Gaia confirm that teenagers are leaving Facebook, deleting the app from their mobile!
Tags: augmented reality, English, Facebook, Konferenz, Partizipation, social media, storytelling, strategie, technology
Published on: Oktober 31, 2017Oktober 31, 2017Author: axelvogelsang