Any links between the fictional character Harry Potter and the charismatic German artist Joseph Beuys seem extremely farfetched if not for Schloss Moyland with its neo-gothic facade. It hosts the biggest collection of the work of Beuys but could easily be mistaken as Hogwarts, where the young student of wizardry (Harry Potter, not Beuys) had to survive quite a few adventures. If you still think this a weird connection, even when considering that Beuys was called both a shaman and a charlatan and that he tried to explain art to a dead hare, then think of Schloss Moyland being the backdrop of a week-long workshop on digital storytelling – the Beuys Digital Summer School. 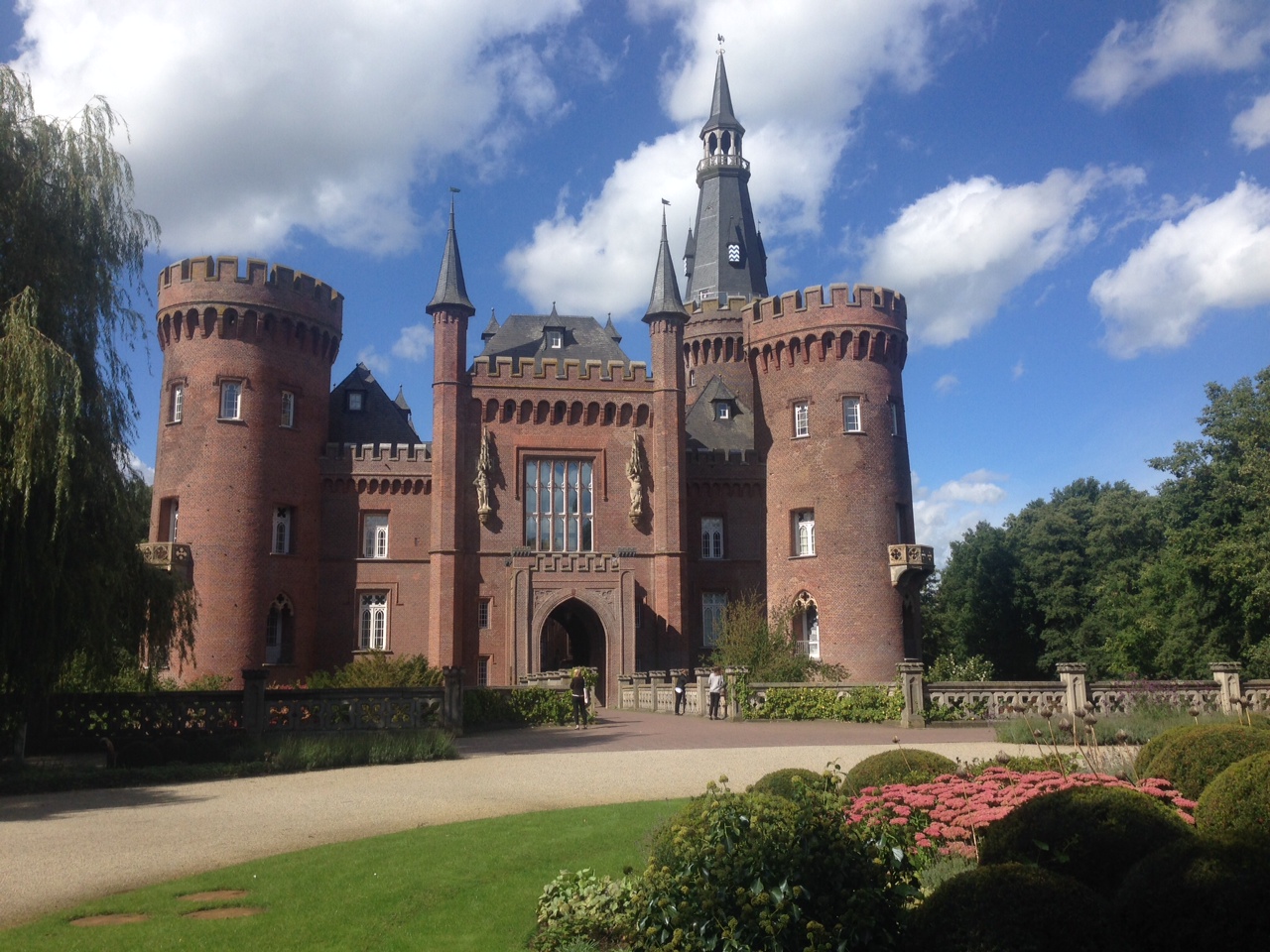 The organisers, Ulli Seegers, Professor at the Heinrich-Heine-University in Düsseldorf, Bettina Paust, artistic director of the Museum Schloss Moyland and Ido Iurgel, Professor at the Hochschule-Rhein-Waal had invited about 25 participants (from about 300 applicants!) and roughly ten other lecturers to reflect on the question of how the work of Beuys could be made more accessible through storytelling with digital and social media. What makes this question particularly delicate is the fact that currently the Joseph Beuys Estate, the copyright holder of the work of Joseph Beuys, prohibits any screening of videos of Joseph Beuys whilst at the same time YouTube and other platforms are full of it (However, as you still won’t find the dead hare performance online you’ll have to put up with this reenactment).

The participants were an amazingly multifaceted group of art historians, art educators, media designers and even a computer scientist and they came from as far as the United States and Russia and almost everywhere in between. The aim was not only to discuss together the challenges that the work of Beuys poses to digitization and art education but also to try out various new pathways and approaches for connecting audiences to his work in a series of workshops.

The initial keynote was given by Massimo Zancanaro from the i3 – Intelligent Interfaces and Interaction research unit at Fondazione Bruno in Trento, Italy. Zancanaro is an interaction designer and has worked on several projects looking at how the user experience of digital museum guides can be improved. I’m most thankful to him for introducing me to the audience model of Veron and Levasseur. Other models like the one of Nina Simon or the one according to Falk describe audiences by their relationship to cultural institutions or the depth of their involvement. That approach is only of limited help when trying to develop a tourguide. Veron and Levasseur instead looked at the actual behaviour of people in a gallery and came up with a „bestiary“ of four different „visitor animals“: The ant, who obediently works herself through the gallery, one work by the other, the fish, who goes for the center of the room, looks around and moves on, the grasshopper who jumps from one side of the room to the other and finally the butterfly, who is a bit like a fish but now and then rests in front of an artwork. Understanding these patterns of movement through a museum is a great insight that helps to personalise a museum’s user experience. 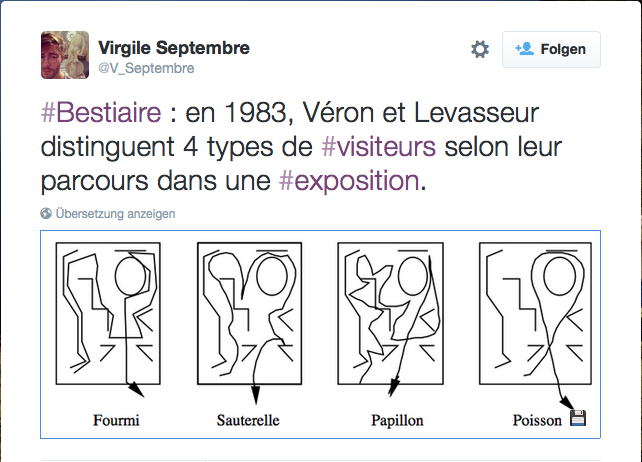 Veron and Levasseurs typology of user behaviour in a gallery: ants, grasshoppers, fish and butterlflies

On the second day we were allowed into Hogwarts itself…, pardon, into Schloss Moyland. We got a tour through the current Beuys exhibition and the archive. I found the latter the most impressive bit. Around 6000 of Beuys’ drawings can be found there. The sheer amount is staggering and I was particularly fascinated by the lady in charge of the archive as she is not only a keeper of cultural treasures but also a huge source of knowledge about the works of Beuys. The exhibition in Schloss Moyland itself though seemed to be an example for what we discussed several times over these days – the incredible challenge of exhibiting Beuys’ ouvre without Beuys himself. Beuys, this enigmatic figure with his hat and his fisherman’s vest was an integral part of the Gesamtkunstwerk that constitutes his later work. Movies would have definitely helped to give an idea of the personality he was but as so often, the copyright holders are either mainly interested in money or otherwise too keen on pushing through their personal perspective on the right interpretation and presentation of the artist’s work thus slowly killing his intentions. Beuys stepped up to what seemed to him an increasingly materialistic world. It is quite ironic to see how his work now seems to have come to nothing more than either a financial asset or the subject-matter of legal quarrels.

Back to the summer school: The structure of the panels as well as the lecturers were well chosen. First there were some introductory lectures by the hosts on the Schloss Moyland collection, art education in general and technical solutions for supporting exhibits. The second part at least partially existed of a deeper debate about Beuys’ work and questions of art pedagogy while the third part concentrated on strategies for storytelling and technical solutions to deliver these stories.

I was very impressed by the approach of Barbara Welzel , an art historian from the Technical University Dortmund whose approach to art education is not about teaching, but about turning teenagers and young adults into embassadors of art. Whilst shopping malls have bright windows, open doors and inviting music she said, heritage sites and museums are too often qualified by thick walls and closed doors. No wonder the kids never go there. She proofed that young people even if they have never visited a museum before, can become fascinated by art. This is not least because she sees art education as a participatory process : „you do not need to like what I show you“. Here you can find her book about this project called Denkwerkstatt (Think-Tank). 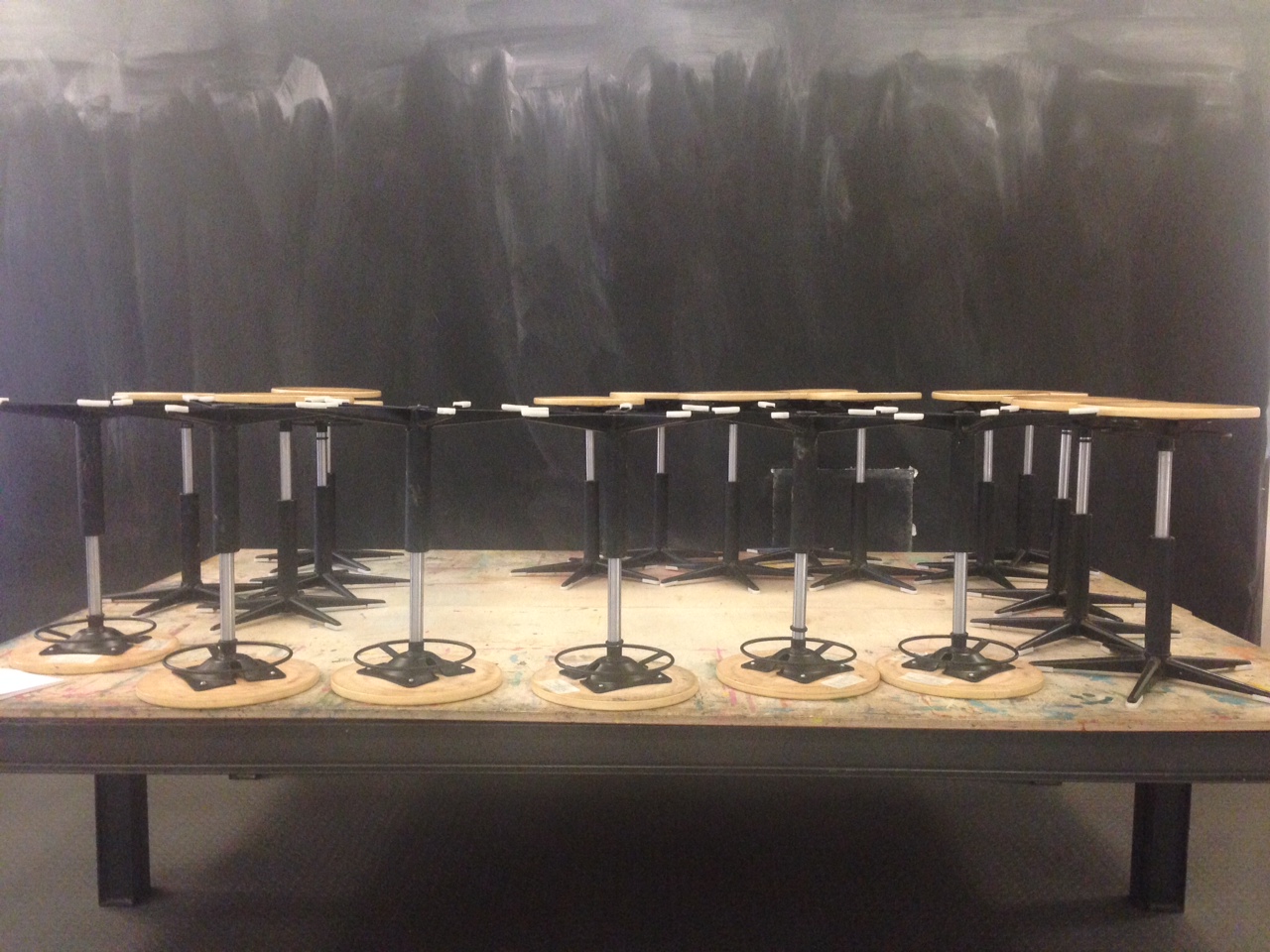 A view into the art education department of Museum Schloss Moyland

The filmmaker Andres Veiel who had managed to come to an agreement with the Joseph Beuys estate, gave some insights into his new film on Beuys that will be shown in the cinemas by next spring hopefully. Veiel quite interestingly pointed out, that Beuys in the early days of his career wasn’t the charismatic storyteller that he became later. It was important that Andreas Veiel at least also touched on the criticism around Beuys. Due to his mysticism and his many references to anthroposophy the German artist was by some accused of actually being a pied pieper and a charlatan and even very close to Nazi ideas. Hans-Peter Riegel wrote a critical biography of Beuys which I haven’t read yet and probably is only available in German. This English text by Buchloh, mentioned by Veiel, situates Beuys very closely to Fashism. I myself have read the biography by Heiner Stachelhaus which was also translated to English and gives a good insight into life, work and thinking of Beuys but to my taste is a bit too taciturn about his whole experiences through the war and Nazism. Judge for yourself.

Eugen Blume, the director of the Hamburger Bahnhof, arguably the most important museum of contemporary art in Berlin gave his talk in German. I was asked whether I could do short summaries in English in between but we all agreed that this wasn’t really practical. As a few of us were already into covering the whole event via Twitter I posted the following:

We successfully crowdsourced the translation of a German talk via Twitter

About five or six of us then covered Blume’s talk in English for the non-German-speakers. That was quite a new experience for me but the feedback was, that it worked out well. I’m a very erratic Twitterer myself. Sometimes you don’t see me on Twitter for weeks and even with Facebook and other Social Media, my presence is very much dependent on how it fits my schedule. So I mainly use Twitter with respect to specific events and their hashtags. This week though I really got into it, as our own little community developed around #digitalbeuys2015. Probably less than a third of the participants had an active Twitter account at the beginning which is quite normal as the microblogging service hasn’t really caught on in many parts of Europe in the same way as it has in the US. But with every day you could see new profiles posting our hashtag, mainly set up by participants, curious about Twitter. That again confirms two thing to me: in order to set up a digital community it helps if you can bond in physical space and secondly, you really need a strong common purpose.

I have followed the EU research project CHESS for a while so it was quite interesting to hear Akrivi Katifori from the University of Athens talk about this approach towards building a framework for mobile museum guides. Most of all though I loved her introduction:

It is very pleasant to see someone admit her own knowledge gap so openly and this is particularly unusual in an academic environment. Bravo!

Bianca Bocatius, a museum pedagogue from Nuremberg gave an overview on how audiences can learn from museums online and showed some interesting examples from the Jewish Museum Berlin, The Tate and the German City of Weimar. Jelena Löckler and Rebecca Hagelmoser both have a background in literary-studies and have developed a storytelling tool-box based on narratological theory for both cultural institutions and businesses. Instead of searching for the one defining story, they help to develop so called storyworlds around organisations from which various stories can be drawn and distributed to different channels – Transmedia Storytelling is the keyword. This was also one of the issues of my talk on narrating the museum with Social Media. The slides of my talk can be found here.

While „institutions“ (I’d rather call them businesses) like the Joseph Beuys Estate or the Andy Warhol Foundation are trying to restrict the access to artists’ work, Joris Pekel from the Europeana project explained how some institutions are increasingly trying to make their work more accessible to the public. The Rijksmuseum with their Rijks Studio and the Städel with their digital collection are only two examples even though both collections profit from the fact that most of the work is not copyright protected anymore. I particularly liked the idea that the Rijksmuseum decided that it was more effective to write funding applications for making all work available online rather than to have staff working on audience requests for digital images, charging a few Euros every time. 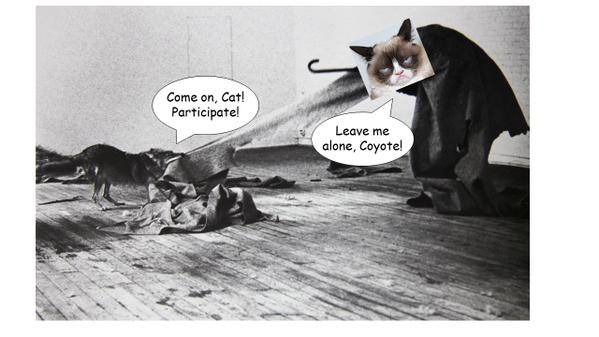 An appropriation of Beuys‘ famous work „I like America and America likes me“ by an unknown artist (Thanks Barbara!)

Copyright! You can probably tell that I’ve got mixed feelings at least when I see how it is dealt with in this context. A very good example how the idea of copyright can be perverted is given by the artist Cornelia Sollfrank. In 2004 she was commissioned to produce a work for the plug-in gallery in Basel on the basis of her net.art generator. The idea was, that this software would automatically produce new pieces of art based on a flower motif by Andy Warhol. The original work by Warhol was in itself a piece of appropriation art. However, It came increasingly clear that Sollfrank and the gallery would get into huge trouble because of the Andy Warhol Foundation. Sollfrank came up with the following solution: Instead of the originally planned artwork she interviewed four lawyers about questions of copyright in fine arts. Those were then presented as talking heads in the gallery. (You’ll find the full story here, German only)