Abstract: We tend to forget that the term „essay“ literally means „trial, attempt“. As Theodor Adorno has pointed out, the essay as a specific textual form necessarily challenges the ideas of pre-established methods and scientific rules and must instead be understood as an adventurous trial, as a radical experiment which „pays for its affinity to intellectual experience with a lack of security.“ Obviously, it is precisely this uncertainty that allows for new findings.

The current boom of online video essays is a prime example for how audiovisual experimentation is not only a new and productive way to understand and analyze literature and culture but can itself become a work of art. However, we mustn’t forget that this new interest in the essayistic actually stands in a long and influential tradition of essayistic writings in English and American literature that needs to be explored.

In this seminar we want to look at both current key exponents of online audiovisual research such as Catherine Grant or Kevin B. Lee as well as putting them in relation to the essayistic texts by key proponents of the form such as Virginia Woolf, James Baldwin, or Susan Sontag. We want to find out how by experimenting with different media, by thinking and playing with them, not only these authors but also we as students and teachers find new ways to analyze and to engage with literary and audiovisual texts. It goes without saying that this course, focused so much on the essayistic as experiment, will also entail experiments of our own with hands-on-exercises in how to make audiovisual essays. 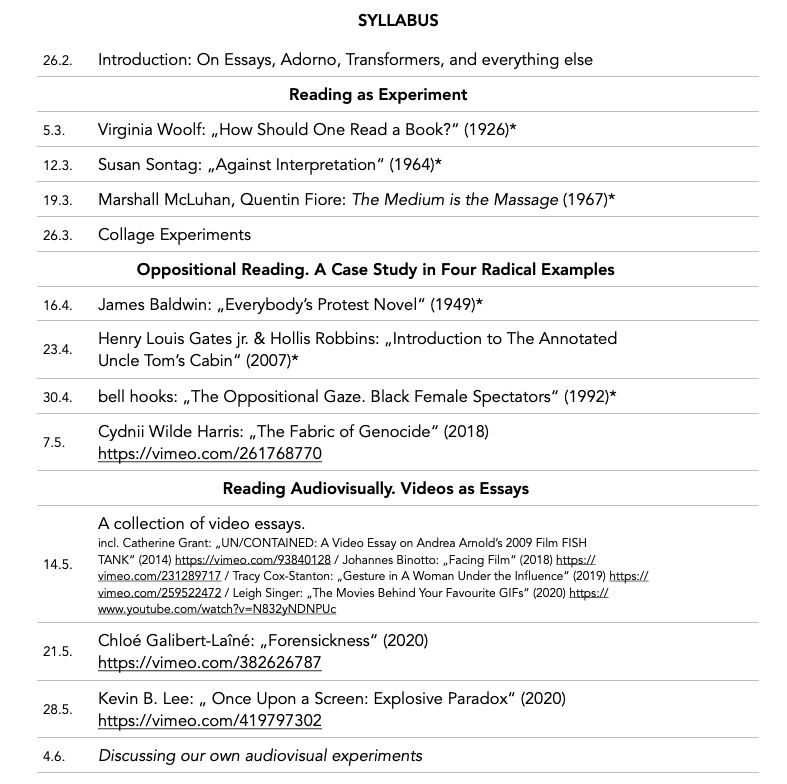