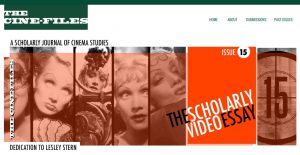 Excerpt: As incidental as it may seem at first, I think the most critical feature of the spectatorial experience offered by a scholarly video essay is determined by its fixed pace and duration.

When I read a scholarly text, I expect a high density of information and concepts; I will read slowly, make notes, read most sentences several times, underline key words, go back to the introduction as often as necessary until I feel that I have comprehended the author’s main argument. More often than not, I will write down in the margins of the page my personal responses to the ideas that I find the most stimulating—or the least convincing. When I’m done, the text (be it a printed book or a digital PDF) will have been visibly modified by my reading. Video essays, on the other hand, flow from start to finish. I can generally press pause, but most videos don’t invite me to. On most platforms, I can’t annotate the video. When I’m done watching, the video is unchanged from my viewing. The best that may have happened is that I was changed (my opinions, the state of my knowledge, my feelings about a certain topic). In other words, I am by default passive.

I am not the first one to argue that the passivity invited by the cinematic apparatus doesn’t encourage the spectator to be critical of the ideas that the film presents to her, nor to analyze the audiovisual techniques with which these ideas are presented. In a scholarly context, this is all the more problematic that images and sounds have other seductions than written words. Images have a form of obviousness that requires specific contextualization, and possibly deconstruction, in order for them to be used as the basis for a rigorous rhetorical argument. As anyone who has ever made a comparative split-screen video knows, there are fewer more manipulative techniques than presenting “evidence” in a visual form. And sounds tend to remain unnoticed, exerting their subconscious work on the viewer’s mind and body—increasing the argument’s impact, but not necessarily its veracity.

Therefore, arguments presented in the form of images and sounds should require extra care both from the author and from the viewer. But this is where the issue of pacing and duration appears: because of the video’s fixed timing, the spectator often has hardly enough time to process one concept or concrete example before the editing of the video has moved on to the next point, the next image, the next sound. And so on, until the end of the video is reached by a spectator who may feel moved, stimulated, bored—I for one generally feel intellectually overwhelmed and a little anxious, and I am typically unable to even recall the structure of the argument that was presented to me. With any other video work, I wouldn’t mind: I can appreciate an aesthetic ride without considering where it takes me. But a scholarly video essay?